I recently was made aware of some work that was done years ago by the USDA that detailed a dry diet for grasshoppers. Grasshoppers don't drink water. They get what little H2O they need from the greens they eat. The green food is also a hurdle in the large scale production of grasshoppers. The feeding aspect is time-consuming and can also be a large expense. I have been contemplating dry feeding options lately in the Thoptera grasshopper facility. If the greens (we feed mostly free, organic lettuce and some wheatgrass) could be supplemented or substituted with a dry feed source, it would make a huge difference in the operation and ultimately profitability.

Below is a photo of some trial work that is ongoing with feeding our grasshoppers a supplement of pelletized forages. The feed is moistened with water at feeding. 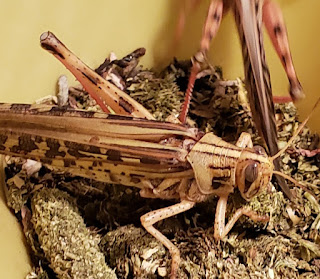 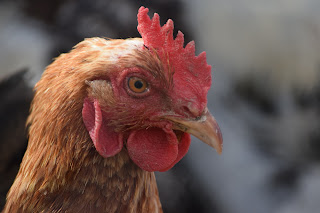 Schistocerca americana (also known as the American Bird Grasshopper) love to eat. Below is a photo of some that are a couple of weeks old at feeding time. They are feasting on some homegrown lettuce from our caterpillar tunnel.

There have been struggles recently with consistent hatches. After speaking with several entomologists, I began to follow of different hatching protocol for Schistocerca americana egg pods. Today was the day the first egg pod was supposed to hatch and it happened right on time. Several dozen nymphs have hatched and more are on the way.

This one container holds 3 or 4 egg pods. This is the first one to hatch and the first one laid. So there should be several more hundred that will hatch from this container in the coming days.
The above video shows the newly hatched nymphs in their new home. The following video shows a side view of the egg pod container. Hatching nymphs can be seen (they are bright green) below the surface in the cavity left by the egg pod.
Work also continues on M. differentialis, but for now the focus of production will be on S. americana.

Working on incubation and hatching....

Work is ongoing relative to establishing a reliable incubation and hatching protocol. Egg pods collected over the summer have been slow and sporadic to hatch. The images below give some insight into what has been going on the last few months.

Some industry contacts have been made as well. Much has been learned and they were kind enough to share a great amount of information.
Posted by ukageng at 10/06/2020 05:02:00 PM No comments:

Thoptera has been working hard to harvest a large amount of egg pods from the first generation captive grasshoppers. Dozens of Melanoplus differentialis were wild caught in northwest Tennessee late last summer into the fall (2019). Those grasshoppers mated in captivity and deposited egg pods. Those egg pods were hatched during the winter indoors. After having over 200 adults almost ready to begin egg laying, we were struck with a fatal error that wiped out our breeding stock to 100 in number. These remaining grasshoppers have grown large after lots of experimentation with lighting, temperature, and feed. They are now laying eggs pods with gusto.

According to literature, each Melanoplus differentialis pod should contain around 100 eggs depending on the size of the pod. We are conducting our own experiments by placing each pod into its own incubation cup. This will allow for testing of different incubation and hatching protocol, and also to gather data about hatching rates.

If all goes well, Thoptera should see mass hatching begin to occur in late June well into July. Anyone in the market for grasshoppers?

I have been growing several different types of grasses for the grasshoppers to feed on. This spring I planted milo, sudan grass, and wheat in my family's garden. I know that Melanoplus differentialis enjoy eating sudan grass since that is what I feed the wild caught insects last fall until frost.
The grasshoppers really enjoyed some fresh produce straight from the garden. I am sure it was a welcomed treat considering they usually are fed romaine lettuce grown somewhere on the west coast of the U.S. I cut the trio of grasses and took them right in to feed to the hoppers. Talk about a fresh meal.